What’s in a number? 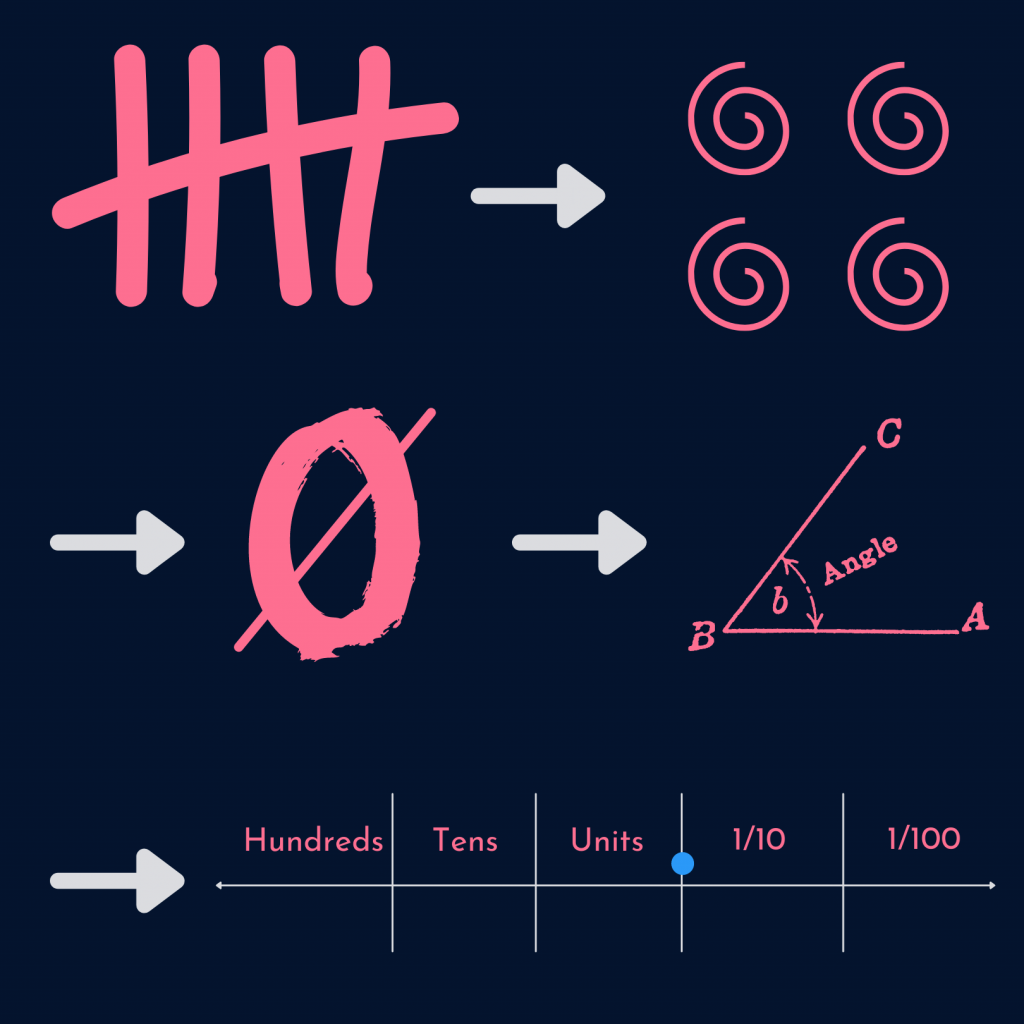 From a mammal bone to outer space; the immense possibility of numbers is amazing. This week, Alexandra Ford gets to the root of maths.

As a child inculcated into the world of English, we are quickly introduced to numbers: what they look like, how to use them and apply them. They are hugely important in our culture: to count; tell time; and the number of days in a year. Not all societies use numbers; this is very specific to our culture. Indigenous peoples of the Amazon, for example, never bother with the concept of numbers. Essentially, numbers and mathematics is a human construct that has been developed over many thousands of years. This means it can be learned by anyone, given the right opportunity.

The history of numbers

For the first evidence of the use of numbers and counting we need to delve back at least 20,000 years to palaeolithic times. The Ishango Bone, excavated in the Congo and probably belonging to a large mammal, shows markings like the tally marks that we still use today. These marks were most likely used to count, although much debate remains. This would have been a one-to-one counting system that represented individual items. We still use this today as it is a great system for counting small groups. Tally marks have been spotted on cave walls, bones, wood and stones throughout the world.

As early civilisations developed, symbols were used instead. For example, the Egyptians used a picture of a coiled rope to mean 100. To write 400, they would have to draw 4 coiled ropes. Much quicker than drawing 400 tally marks, but thankfully a long way from writing out all the numbers.

Welcome to the zero

More complex systems emerged around 4000 years ago, seemingly side by side, yet independently of each other. The Babylonians in Mesopotamia, the Chinese and the Mayans in Central America developed symbols that could be reused. Depending on the position they were in relation to the other symbols would affect the meaning. The Mayans and Hindu-Arabic numbers systems added a zero symbol. Previously, a zero would just be left blank leading to confusion, for example between 23 and 203 – imagine getting away with that in an exam today! Within each of these societies, numbers expanded due to trade and agriculture. As the system became more able to handle larger numbers, trading or bartering was not limited by counting and could grow in capacity.

At the same time, ancient Egyptians started using numbers for measuring, not just counting. It allowed them to build the Great Pyramids of Giza, the only ancient wonder of the world still standing today. This was the beginning of human’s understanding of geometry and advanced mathematics.

Interestingly, during the time of the Greeks and Romans, there was a marked difference in their approach to numbers. The Romans were less interested in complex mathematics and were focused on using numbers to solve practical problems. Use of a number system using symbols without using a place value system was very limiting.

In contrast, the Greeks made huge strides in theoretical maths. They came to understand trigonometry inordinately helpful for engineering and astronomy. Even the Roman calendar, which was used for 1500 years, was created by a Greek astronomer named Sosigenes of Alexandria. Sosigenes studied the patterns of the Earth and sun and added a leap day every four years into the calendar; the very leap day that we still have in our own calendar.

In the 7th Century, Indian mathematicians solidified the base 10 system. With the increase in international travel, it spread throughout the world to become one of the major counting systems in use today.

A base number system simply uses a set number of symbols in specific place values to represent a bigger number. The method uses 10 digits, 0-9, and a place value chart to represent an infinite number of numbers. This structure allows us to compute larger calculations, and when symbols for plus, minus and square root and negative numbers came into play, our ability in mathematics increased again.

We can see evidence of different base numbers today. The Babylonians 4000 years ago used a base 60 number system. Today, we use base 60 to tell the time. The Binary Code is a base 2 system and is used in computers. It uses a 0 and 1, meaning ‘off’ and ‘on’ respectively, to store information such as software and documents. Base 2 and base 10 systems can be easily converted between the two, otherwise all we would see on the screen is a series of 0s and 1s, would be utter nonsense.

The application of numbers

As trade and agriculture increased, the need for numbers increased. In turn, with a better system in place, sophisticated agriculture and trade grew. This has been replicated throughout history. With our increased understanding of numbers and maths, we have been able to use that knowledge to increase our understanding of the world around us to invent new and exciting things. Numbers inform art, music, design, engineering, technology and understanding of nature.

Without the discovery of electricity and, more importantly, the research into harnessing that electricity using mathematics and engineering, we would not have computers or phones. We would never have sent humans into space or be able to provide people with life-saving medical technology. Through the exploration of the beauty and structures in nature, our ability to build stunning buildings and artworks has been possible.

One such mathematical concept is the Golden Ratio and the Golden Angle. These Golden rules are closely linked to Fibonacci numbers, which create a spiral effect. Supposedly, human nature is drawn to the aesthetically pleasing nature of the Golden Ratio. The Golden Angle of 137.5 degrees can be seen in nature as a tool for survival. Flower petals and leaves on a stem are arranged using the Golden Angle. Each petal is placed, around a circle, 137.5 degrees away from the last giving each one the best chance of getting as much sun as it can. The Golden Rules can be seen in the swirl of a galaxy and the inside of a nautilus shell.

The Parthenon in Athens has its own mathematical rules to create the perception that its lines and pillars are straight, despite this not being the case. Our exploration of the natural world, which has been adapting and changing for billions of years to become strong and resilient, has led to the invention of our own art and science.

With the development of numbers, a need to communicate their meaning arose and writing systems were created, altered and expanded. We created a need and desire for different letters and words.

Tune in next week for a history of the English language…